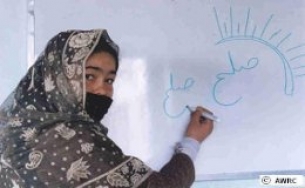 Throughout the week, we will be posting the responses of GAPS partners to the new United Nations Security Council Resolution 2106 on preventing sexual violence in conflict. Here is the response from Womankind Worldwide:

On Monday the UK’s Foreign Secretary William Hague called on world leaders at the United Nations Security Council to “consign the use of rape as a weapon of war to the pages of history”. With that the UN unanimously adopted a new Security Council Resolution (UNSCR 2106) – a set of commitments designed to prevent and respond to sexual violence in situations of armed conflict.

The Resolution brings a renewed global focus to the issues affecting women in conflict. But the real test will be whether the commitments go beyond the paper they’re written on and start to make a positive difference to the daily lives of women living through war.

Whilst there has been some progress over the past 13 years, much of the promise of the resolutions is still to be fulfilled. A recent study shows that over the past 20 years, only 16% of peace agreement texts even mention women, and whilst there has been some improvement since the passage of Resolution 1325, we are still a long way from achieving women’s full and meaningful participation in peacebuilding. Women make up less than 3% of signatories to peace agreements, and the UN has never appointed a woman chief mediator in any UN backed peace process.

Meanwhile, sexual violence in conflict is widespread: between 20,000 and 50,000 women were raped during the war in Bosnia in the early 1990s; in Sierra Leone, between 50,000 and 64,000 internally displaced were sexually assaulted by combatants; and during the 100 days of the Rwandan genocide, it is documented that 500,000 women were raped. Few perpetrators have ever been brought to justice for these crimes.

Recognising women’s rights organisations
Importantly, in the Foreign Secretary’s speech, he paid tribute to “the organisations and individuals who have worked for years so that the world knows and understands the scale of rape and sexual violence in conflict, and have helped persuade Governments to take it seriously as many of us are now doing”.

The Resolution itself also takes some important steps forward in recognising the role of women’s rights organisations, something that at Womankind we have long called for. First it emphasises the “important role that can be played by women, civil society, including women’s organisations… in exerting influence over parties to armed conflict with respect to addressing sexual violence”.

Second, it mandates envoys and peace mediators to engage with women’s organisations and survivors of sexual violence, and crucially to include their concerns in all peace provisions. Thirdly, it highlights the roles of local level women’s rights organisations in providing community-level protection against sexual violence.

This recognition gives much deserved credit to women’s rights organisations, such as our partners Graceland Services in Sierra Leone, DEMUS in Peru and Isis-Wicce in Uganda, who have long worked to tackle all forms of conflict-related violence against women. Yet it comes with a price.

As our From the ground up report showed, women’s rights organisations are building peace on a shoestring. They provide vital services in their communities, mediate conflicts, and support women’s greater participation in decision-making at local and national levels, yet their work is often unrecognised, and almost always under-funded.

National Action Plan
The leadership that the UK government has shown on the world stage in ensuring a new UN Resolution on sexual violence is very welcome. Global frameworks are an important way to mandate action and they give women affected by conflict an important tool to claim their rights. Now the Foreign Secretary William Hague, along with Secretary of State for International Development Justine Greening and Secretary of State for Defence Philip Hammond, have a timely opportunity to translate the UK’s global commitments into national action.

This year, the government is evaluating its own National Action Plan on Women, Peace and Security, and developing a new Plan for launch in 2014. For their stated commitment to women’s participation and the role of women’s rights organisations to be realised, they need to ensure that attached to the National Action Plan is a clear budget, with funding directed to women’s rights organisations in conflict-affected countries, and to supporting women’s rightful and meaningful participation in all peace processes.

Only then will the important promises made at the Security Council reach the women building peace in their local communities.