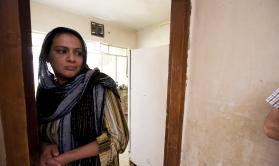 At a recent meeting of the All-Party Parliamentary Group on Women, Peace and Security (APPG-WPS), for which GAPS  hosts the secretariat, 40 representatives from Parliament, Whitehall and civil society participated in a discussion on tackling sexual violence in Iraq and Syria.

Baroness Hodgson, Chair of the APPG-WPS and the GAPS Advisory Board, opened the proceedings by setting out the global context for the discussions. 2015 looks set to be a crucial year for women, peace and security issues, particularly with the 15th anniversary of the adoption of the landmark UN Security Council Resolution 1325. Baroness Hodgson also briefly remarked upon her recent visit to Iraq, where she saw firsthand the difficulties faced by the women there.

This was followed by a presentation from Rosy Cave, Senior Conflict Adviser and Head of the Conflict & Stabilisation Team at the UK’s Stabilisation Unit. Rosy summarised some of the work of the Government’s Preventing Sexual Violence Initiative (PSVI), currently operating in Iraq, including the training of Peshmerga fighters in preventing sexual violence and building the capacity of groups to document crimes for future accountability efforts.

Rosy also emphasised a number of challenges, such as the difficulty in addressing gender equality issues which have been entrenched in social norms over a long period; the exceedingly high demand for psychosocial support and the lack of resources to meet this demand; and the stigmatisation faced by women who’ve fallen pregnant as a result of sexual violence.

Following this, Laila Alodaat, Crisis Response Programme Manager for Women’s International League for Peace and Freedom (WILPF), shared the experiences of women WILPF has worked with in both Iraq and Syria. She stated that not enough support is given to grassroots women’s groups to act as positive agents of change, with a focus instead on the victimisation of women.

This hampers groups whose work is in many cases the only support for women and girls on the frontline of conflict. In addition, these groups may also be adversely affected by counter-terrorism laws due to their geographic proximity to ISIS-controlled areas, isolating them further.

In a wide-ranging Q&A session participants discussed a number of women, peace and security issues in the context of Iraq and Syria, including: the logistics of documenting and prosecuting crimes on a large scale; what practical steps could be taken to empower women’s groups and increase their participation in conflict resolution; areas of overlap with other identity-based violence; the role of the UN in addressing sexual violence in conflict; and the potential risk of focussing on ISIL and overlooking other actors in the region.

This is a guest blog from Hayley Richardson, Coordinator of the APPG-WPS and Policy and Advocacy Manager at UNA-UK. For for further information about this meeting or the work of the APPG-WPS please contact Hayley on richardson@una.org.uk

APPG on Women, Peace and Security: Joint event to mark International Women’s Day and in Support of Afghan Women and Girls

Updates The 10 Steps: Turning Women, Peace and Security Commitments to Implementation On Tuesday 29…

Meeting of APPG-WPS with the Free Yezidi Foundation

The All-Party Parliamentary Group on Women, Peace and Security (APPG-WPS), for which GAPS provides the…