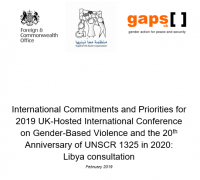 In 2019, the UK Government funded GAPS and its partners to undertake consultations on Women, Peace and Security to mark the 20th anniversary of United Nations Security Council Resolution 1325 in 2020. GAPS and Together we Build It (TWBI) worked with the UK Foreign and Commonwealth Office (FCO) and the Institute for War and Peace Reporting (IWPR)’s Ante Raeda programme to hold a consultation with Libyan civil society organisations. Ahead of the consultation, IWPR collected responses to a set of UK Government questions on the topics discussed at the consultation. GAPS and TWBI also used a recent Women’s International League for Peace and Freedom (WILPF) policy brief on Libya based on national consultation.

This report is part of a series of eight consultations that GAPS, its members and national partners have undertaken with the UK Government.

Now and the Future – Pandemics and Crisis: Gender Equality, Peace and Security in a COVID-19 World and Beyond: Briefing – Lebanon

The Lebanon briefing as part of the Now and the Future - Pandemics and Crisis:…

Displacement and Women’s Economic Empowerment: Voices of Displaced Women in the KRI

Women for Women International UK, the LSE Centre for Women, Peace and Security and GAPS…

Focus Group Discussion on the UK National Action Plan on Women, Peace and Security: Sexual violence during and after conflict