Welcome to our August wrap-up.

This month, GAPS joined human rights and women’s rights organisations across the UK and Afghanistan as they marked one year since the handover of Afghanistan to the Taliban, where many were forced to flee. Women and girls in Afghanistan have faced major restrictions on their freedom over the past year, increasing economic uncertainty, and reduced or no access to education. Women human rights defenders and activists who are still in Afghanistan face human rights abuses, threats of violence and intimidation. Thousands of Afghan  refugees who were evacuated to the UK following the takeover last year are still stuck in hotels, and many others who have arrived in the UK have been threatened with removal to Rwanda for processing (some of whom were expected to be on the first flight in June before it was halted by the court). There is no safety for Afghan refugees while the UK’s Rwanda Policy stays in place. The UK Government must uphold their promises and responsibilities to Afghans both in the UK and those that are still left behind, and it must ensure that there are safe and legal routes to the UK for those facing imminent danger. We also echo calls from the Afghan Women Coalition for Change on their seven actions to restore justice in Afghanistan.

Flash flooding in Pakistan means that one third of the country is under water, with over 33 million people affected, and over 1000 people dead. the UN and Pakistani Government have launched an appeal for $160m to fund emergency aid to help deal with the crisis, and UN Secretary General Antonio Guterres’ statement urges the world to “stop sleepwalking toward the destruction of our planet by climate change”. The UK Government has pledged £1.5m toward Pakistani relief efforts, but this is not enough. It is vital that the UK puts a sufficient and proportionate amount of funding to the relief effort, and makes sure that all responses to the floods are gender-responsive and includes women’s rights organisations. Similarly, GAPS has called on global leaders to establish a loss and damage finance mechanism at COP27 to support communities that are disproportionately affected by the climate crisis, including women and girls.

The new UK Prime Minister will be appointed in the coming days. Once the cabinet has been appointed, we are looking forward to hosting the Annual Report to Parliament and publishing our yearly Shadow Report which assesses the UK Government’s action on Women, Peace and Security 2021. Find out all about our APPG events and how to keep in touch via our website here.

For August, in which China has the presidency of the UN Security Council, the MAP provides recommendations on the situations in Syria and Yemen.

“Where I am Going and Where I am” Afghanistan Report

One year on from the fall of Kabul, this joint policy brief by Women for Women International and the Women’s International League for Peace and Freedom shares the key findings and recommendations following field and desk research and discussions with Afghan women’s rights activists and human rights defenders. 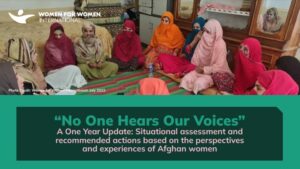 No one Hears our Voices: A one year update

This report by Women for Women International follows up on the “No One Hears our Voices” paper that was published in March 2022. The most recent report provides an update on the situation for women and girls in and outside of Afghanistan, and revisits the policy recommendations written earlier in the year. 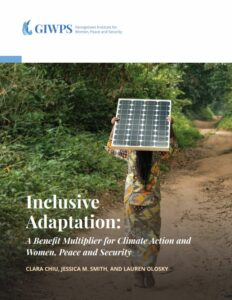 Inclusive Adaptation: A Benefit Multiplier for Climate Action and Women, Peace and Security

The Georgetown Institute for Women, Peace and Security’s report shows how the meaningful inclusion of women in climate adaptation could be a benefit multiplier by strengthening climate response, gender equality, and security. The report’s conclusion outlines five key action for inclusive adaptation. 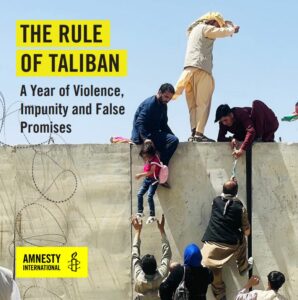 Afghanistan: The Rule of Taliban: A year of violence, impunity and false promises

This Amnesty International briefing aims to document serious human rights violations by the Taliban over the past year, highlighting the lack of accountability by the Taliban and the weak international response to address the situation.

In case you missed it

The Foreign, Commonwealth and Development Office (FCDO) published it’s annual report for 2021-2022 at the end of July. You can read the report here, and Bond’s response here.

Rethinking Security are hiring for two roles:
1. Policy and Communications Officer, deadline 5th September
2. Consultant: Academic Outreach Coordinator, deadline 12th September
Find out more about both roles and how to apply on their website!

The LSE Centre for Women, Peace and Security published a blog written by Dr Paul Kirby, Dr Hannah Wright and Dr Aisling Swaine on “Doing Women, Peace and Security Better: Opportunities for the Next UK National Action Plan”. The piece looks at the UK’s contribution to the WPS Agenda, discussing the strengths and limitations of the UK’s work and providing recommendations for future WPS plans. Read it here.

Manager of People, Culture and Wellbeing, (London). Apply by 14 September

Welcome to our November wrap-up. This month, all eyes were on COP26 as global leaders, civil society and…

Now and the Future – Pandemics and Crisis: Gender Equality, Peace and Security in a COVID-19 World and Beyond: Briefing – Ukraine

The Ukraine briefing as part of the Now and the Future - Pandemics and Crisis:…