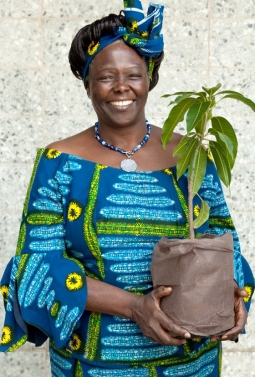 CELEBRATING NINE WOMEN CAMPAIGNERS FOR PEACE – NO.6
To celebrate International Peace Day 2014, we are celebrating nine women campaigners for peace from around the world. These women have been recognised by Noble Peace Prizes, National awards and appointments to peace negotiating teams. There are also countless women who have pushed for peace in conflicts around the world whose efforts have not been recognised. We salute their instrumental, ongoing work for change.

Today we are profiling Wangari Maathai from Kenya.

Wangari Maathai is internationally recognised for her persistent struggle for democracy, human rights and environmental conservation. She was awarded the Nobel Peace Prize in 2004 for her contribution to “sustainable development, democracy and peace.” Born in Nyeri, Kenya in 1940, Maathai was the first woman in East and Central Africa to earn a doctorate degree.

She was active in the National Council of Women in where she first introduced the idea of planting trees in 1976. This grew into a grassroots organisation whose main focus was the planting of trees with women’s groups to conserve the environment and improve their quality of life. Through the Green Belt Movement Maathai helped women plant more than 20 million trees on their farms and on schools and church compounds. In 1986, the Green Belt Movement established a Pan African Green Belt Network, and established similar tree planting initiatives in countries across Africa including in Tanzania, Uganda, Malawi, Lesotho, Ethiopia and Zimbabwe.

Maathai played a key role as co-chair of the Jubilee 2000 Africa Campaign, which sought cancellation of the unpayable backlog debts of the poor countries in Africa by the year 2000, and she has campaigned widely against land grabbing. The Nobel Peace Prize Committee stated that Maathai “stands at the front of the fight to promote ecologically viable social, economic and cultural development in Kenya and in Africa. She has taken a holistic approach to sustainable development that embraces democracy, human rights and women’s rights in particular. She thinks globally and acts locally.”

In accepting the award, Maathai said:

“I believe the Nobel committee was sending a message that protecting and restoring the environment contributes to peace; it is peace work … I always felt that our work was not simply about planting trees. It was about inspiring people to take charge of their environment, the system that governed them, their lives, and their future.”