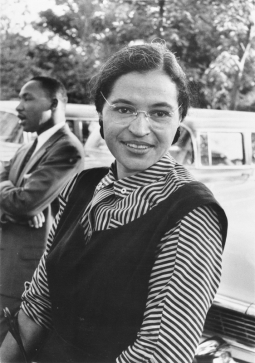 CELEBRATING NINE WOMEN CAMPAIGNERS FOR PEACE – NO. 7
To celebrate International Peace Day 2014, we are celebrating nine women campaigners for peace from around the world. These women have been recognised by Noble Peace Prizes, National awards and appointments to peace negotiating teams. There are also countless women who have pushed for peace in conflicts around the world whose efforts have not been recognised. We salute their instrumental, ongoing work for change.

Today we are profiling Rosa Parks from the United States of America.

Rosa Parks played a central role in a revolution to secure equal treatment under the law for black Americans. Parks’ act to refuse to give up her seat to a white man on December 1, 1955 was seen as “an act that forever changed White America’s view of Black people, and forever changed America itself.”

Her defiant act in Montgomery, Alabama made her a symbol overnight for the thousands of frustrated black Americans who faced daily indignity through segregation laws that governed their everyday behaviour in public places. When Parks refused to give up her place on the bus, the bus driver threatened to call the police. Parks said: “Go ahead and call them.” Parks was driven to the police station, booked, fingerprinted, photographed and jailed.

Parks’ arrest led to a boycott of the public transportation system led by several influential black leaders including Dr. Martin Luther King Jr. The boycott of Montgomery’s city buses by people of colour was almost universal on December 5, 1955, and due its success the boycott was continued indefinitely. Ebony correspondent Roxanne Brown wrote: “For 381 days, Blacks car-pooled and walked to work and church. Their unified effort not only helped put an end to Jim Crow sectioning on the buses, it was also financially devastating for the bus company. It was this monumental event — watched by the world — that triggered the modern-day Black Freedom Movement and made a living legend of Mrs. Parks.”

Rosa Parks set up a Detroit-based foundation, The Rosa and Raymond Parks Institute for Self-Development, and received many awards in her lifetime, including the Congressional Gold Medal of Honor in July 1999, the nation’s highest civilian award.

She wrote in her book, Rosa Parks: My Story, that: “People always say that I didn’t give up my seat because I was tired but that wasn’t true – I was not tired physically, I was not old. I was 42. No, the only tired I was, was tired of giving in.”