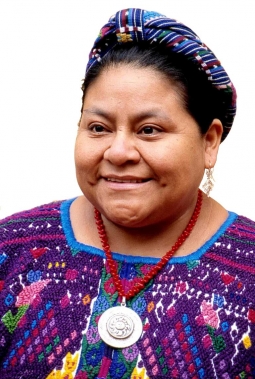 CELEBRATING NINE WOMEN CAMPAIGNERS FOR PEACE – NO. 8
To celebrate International Peace Day 2014, we are celebrating nine women campaigners for peace from around the world. These women have been recognised by Noble Peace Prizes, National awards and appointments to peace negotiating teams. There are also countless women who have pushed for peace in conflicts around the world whose efforts have not been recognised. We salute their instrumental, ongoing work for change.

Today we are profiling Rigoberta Menchú Tum from Guatemala.

Menchú, a Mayan Indian of Guatemala, was awarded the 1992 Nobel Peace Prize “in recognition of her work for social justice and ethno-cultural reconciliation based on respect for the rights of indigenous peoples.”

Born into poverty, working since she was a child of 8, she managed get a minimal education at her church and taught herself Spanish so she could describe to the world the sufferings of her people.

Menchú’s mother, brother and father were murdered by government soldiers due to her father’s opposition to the landowners in Guatemala. Although Menchú took part in violent actions with the Guatemalan guerrillas, she then turned to political and social work for her people instead of violence. Menchú said when she was awarded the Nobel Peace Prize that she “understood revolutionary in the real meaning of the word ‘transformation’”.

She was referred to in her Nobel Prize presentation speech as an example of someone who was able to “preserve their humanity in brutal and violent surroundings”, and be “a vivid symbol of peace and reconciliation across ethnic, cultural and social dividing lines”.

Building on Menchú’s legacy, Guatemala is known as a country where women have played an important role in peacebuilding. Proposals from local women’s rights organisations strongly influenced the content and wording of the Guatemalan Peace Accords in 1996, known as the Agreement for a Firm and Lasting Peace. The peace agreement contained a number of important provisions regarding gender equality and is considered one of the most inclusive and participatory worldwide.

APPG on Women, Peace and Security hosts the UK Government’s Annual Report to Parliament in 2019