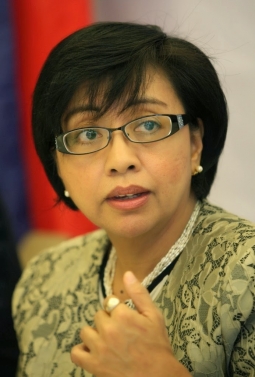 CELEBRATING NINE WOMEN CAMPAIGNERS FOR PEACE – NO. 9
To celebrate International Peace Day 2014, we are celebrating nine women campaigners for peace from around the world. These women have been recognised by Noble Peace Prizes, National awards and appointments to peace negotiating teams. There are also countless women who have pushed for peace in conflicts around the world whose efforts have not been recognised. We salute their instrumental, ongoing work for change.

Today we are profiling Miriam Coronel Ferrer from the Philippines.

In Ferrer’s own words, peace “… requires a lot of patience. It requires persistence and certainly it’s very important that you have your eyes wide open, your feet on the ground and that you do a lot of exploration. A lot of creativity, both in substance and in language, to be able to sustain a process and to find alternatives. It involves a lot of understanding of the issues on hand and being well equipped to be able to really seriously analyse and to provide all the possible options that can be put on the table.”

“It’s difficult but there is always that desire to be able to see the fruition of this process so that we will be able to come closer to a society where everybody can coexist and peacefully compete with each other.”

Assessing UK Government Action on Women, Peace and Security in 2019

In this shadow report, GAPS assesses the 2019 Annual Report to Parliament by the UK Government and focuses on how the UK Government has used, and could have used, the second year of implementation for this National Action Plan (NAP) Read More

On Tuesday 23 March 2020, the All-Party Parliamentary Group on Women, Peace and Security (APPG-WPS), together with GAPS hosted a virtual event titled ‘Call to Action: Now and the Future, COVID-19 and Gender Equality, Global Peace and Security’. This event Read More