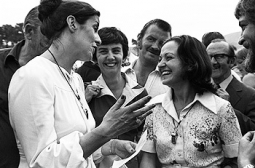 CELEBRATING NINE WOMEN CAMPAIGNERS FOR PEACE – NO. 3 AND NO. 4
To celebrate International Peace Day 2014, we are celebrating nine women campaigners for peace from around the world. These women have been recognised by Noble Peace Prizes, National awards and appointments to peace negotiating teams. There are also countless women who have pushed for peace in conflicts around the world whose efforts have not been recognised. We salute their instrumental, ongoing work for change.

Mairead Maguire became active in the Northern Ireland peace movement after her sister Anne Maguire’s three children were hit and killed by an out of control car on 10 August 1976. The car was being driven by an IRA fugitive, who had been fatally shot by British authorities while trying to make a getaway.

Betty Williams, a local resident was driving by when she heard the gunshot and came to scene of the children and their mother. Within two days, Williams had obtained 6,000 signatures on a petition for peace and gained media attention. In the days that followed she assembled 200 women to march for Peace in Belfast, which passed near the home of Mairead Maguire who joined it. She and Williams became the joint leaders of a virtually spontaneous mass movement, co-founding the Women for Peace which later became The Community for Peace People.

Their next march, to the graves of the three children, was attended by 10,000 Protestant and Catholic women. A march the following week brought 35,000 participants onto the streets of Belfast petitioning for peace between republican and loyalist factions.

The First Declaration of the Peace People rejected the ‘use of the bomb and the bullet and all the techniques of violence’. Maguire was convinced that the most effective way to end the violence was not through violence but through re-education, in contrast with the prevailing mood at the time. The Peace People published a biweekly paper, Peace by Peace, and provided families of prisoners a bus service to get to Belfast’s jails and back.

Maguire and Williams received the 1976 Nobel Peace Prize for their efforts. Upon receiving the Nobel Peace prize, Williams said:

“A deep sense of frustration at the mindless stupidity of the continuing violence was already evident before the tragic events of that sunny afternoon of August 10, 1976. But the deaths of those four young people in one terrible moment of violence caused that frustration to explode, and create the possibility of a real peace movement … As far as we are concerned, every single death in the last eight years, and every death in every war that was ever fought represents life needlessly wasted, a mother’s labour spurned.”