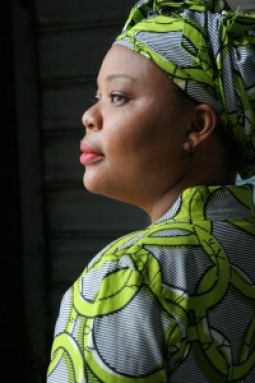 CELEBRATING NINE WOMEN CAMPAIGNERS FOR PEACE – NO.1
To celebrate International Peace Day 2014, we are celebrating nine women campaigners for peace from around the world. These women have been recognised by Noble Peace Prizes, National awards and appointments to peace negotiating teams. There are also countless women who have pushed for peace in conflicts around the world whose efforts have not been recognised. We salute their instrumental, ongoing work for change.

Today, we are profiling Leymah Gbowee from Liberia:

Leymah Gbowee is a Nobel Peace Prize-winning peace activist who was a central part of the Liberian women’s peace movement that brought an end to the Second Liberian Civil War in 2003. With a background in social work and trauma healing, she formed Women of Liberia Mass Action for Peace, which cut across religious and ethnic lines. By handing out flyers at mosques, markets and churches, Gbowee and others grew the movement to massive non-violent demonstrations and sit-ins in Monrovia, Liberia’s capital.

Gbowee pressured President Charles Taylor for his attendance at the peace talks in Ghana, and then went there herself with a delegation of Liberian women to demonstrate outside the hotel in Accra where the talks were being held. After the talks had dragged on without progress for two months, Gbowee and other women peace activists went into the hotel and sat down in front of the main entrance to the negotiating hall. When men tried to leave the hall, Gbowee and her allies threatened to rip their clothes off, saying in her book, ‘Mighty Be Our Powers’ that, “In Africa, it is a terrible curse to see a married or elderly woman deliberately bare herself”.

The women remained outside the negotiating room throughout the following days, preventing men from leaving and ensuring a change of atmosphere at the peace talks. The Liberian war ended officially weeks later, with the signing of the Accra Comprehensive Peace Agreement on August 18 2003.

Much-acclaimed and awarded for her tireless peace efforts, Gbowee is now the founder and president of Gbowee Peace Foundation Africa, an NGO based in Monrovia that provides educational and leadership opportunities to girls, women and young people in Liberia.

In an interview Gbowee said:

“The Liberian women peace movement demonstrated to the world that grassroots movements are essential to sustaining peace; that women in leadership positions are effective brokers for peace; and the importance of culturally relevant social justice movements. Liberia’s experience is a good example to the world that women—especially African women—can be drivers of peace.”

On Tuesday 23 March 2020, the All-Party Parliamentary Group on Women, Peace and Security (APPG-WPS), together with GAPS hosted a virtual event titled ‘Call to Action: Now and the Future, COVID-19 and Gender Equality, Global Peace and Security’. This event Read More

APPG on Women, Peace and Security: “International Women’s Day 2020: Brave women on the frontlines of peace and rights”

Call to Action: Now and the Future, COVID-19 and Gender Equality, Global Peace and Security

The ‘Call to Action: Now and the Future, COVID-19 and Gender Equality, Global Peace and Security’ paper addresses the deeply gendered impact of COVID-19. The outbreak of COVID-19 has led to over a million confirmed cases, and tens of hundreds Read More