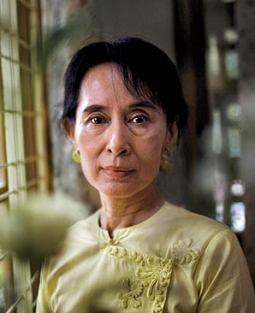 CELEBRATING NINE WOMEN CAMPAIGNERS FOR PEACE – NO.2
To celebrate International Peace Day 2014, we are celebrating nine women campaigners for peace from around the world. These women have been recognised by Noble Peace Prizes, National awards and appointments to peace negotiating teams. There are also countless women who have pushed for peace in conflicts around the world whose efforts have not been recognised. We salute their instrumental, ongoing work for change.

Suu Kyi is a Myanma opposition politician and chairperson of the National League for Democracy in Myanmar. One of the world’s most prominent political prisoners, she was detained under house arrest in Myanmar for almost 15 years until her most recent release on 13th November 2010. At the ceremony for Suu Kyi’s Nobel Peace Prize in December 1991, she was still being held in detention by the military dictatorship in Myanmar and could only be represented by her two sons and husband.

Suu Kyi’s commitment to non-violence is inspired by Mahatma Gandhi, who she learned about as a child when her mother was an ambassador to India. She was also inspired by her father, Aung San, the leader in Burma’s struggle for liberation, who was assassinated when she was two. Her Buddhist faith is the foundation for her belief in human rights and has encouraged her to be fearless. During her election campaign Suu Kyi defied a detachment of soldiers who threatened to fire on her if she continued to walk down the street.

In her conclusion Suu Kyi writes that ‘”truth, justice and compassion…are often the only bulwarks against ruthless power”.