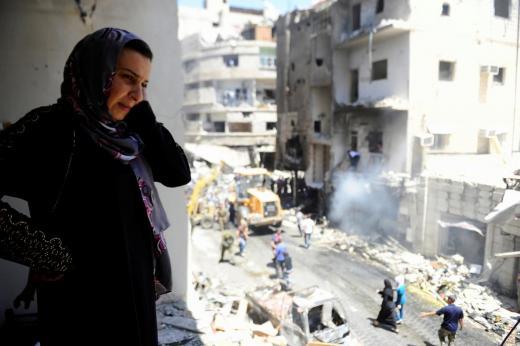 “Women are bearing the brunt of the war and keeping the country together.”

The conflict in Syria is now in its eighth year. The conflict is linked back to breakouts of mass protests demanding freedom and justice and the Syrian government’s response to such demands.
In February 2016 the United Nations announced the formation of the Syrian Women’s Advisory Board. This Board is a group of 12 Syrian women tasked with advising the United Nations special envoy overseeing the peace talks. UN Women called the formation of the group, which is the first-ever formal women’s advisory board to a United Nations envoy, a historic moment  (UN Women, 2016; Alfred, C., 2016). Whilst the Board is welcome, it does not have a formal advisory role. Rather it is called upon by those in the main talks when they want their advice. It is not yet known how much this board will be consulted in the upcoming stalled peace talks. Once again, the terms of the talks are excluding women.

Long before the outbreak of violent conflict in Syria in March 2011, women and girls in Syria had been disproportionately subject to violence and silenced within both public and private settings (International Rescue Committee, 2014) . This is due in part to the patriarchal gendered construction of societal relations in the region that deem women inferior to men. State-led gender-based discrimination is evident in legislation.
Laila Alodaat, a Syrian human rights lawyer and Crisis Response Manager of our member WILPF, said: “For decades now, the systematic discrimination against women, in law and in practice, has left Syrian women in a weak and unfavourable position. They live in a culture that tolerates their degradation through tradition and neglects their physical and psychosocial well-being” (Friedrich Ebert Foundation, 2015).

Violence against Women and Girls

The various forms of gender-based exclusion, discrimination and Violence against Women and Girls have evidently become exacerbated by the past five years of on-going conflict. The modes of violence within Syria towards women and girls during the conflict include frequent and increasing levels of forced displacement and disappearing, sexual assaults, sexual harassment, rape, early forced marriage, crimes in the name of honour, intimate partner violence (IPV) and kidnappings (FIDH, 2013). GAPS member, International Rescue Committee (2013) reported the increase of IPV, forced marriage and rising widespread fears of sexual assault and abuse. They said that rape is a “prominent and disturbing feature” of the conflict.

Syrian women and girls, displaced and dispersed in refugee camps and crossing through countries and international borders to flee the raging conflict are also subject to disproportionate forms of violence (UN Women, 2013; WILPF, 2016). These modes of violence are known to have clear and stark impacts on women and girls. It is clear is that there needs to be fast, sensitive and unwavering support for women and girls in the Syria response. Support to local organisations and Women’s Rights Organisations committed to peace and empowering women is key to peace and preventing the systematic Violence against Women and Girls.

“The women activists said peacebuilding gave them agency in the middle of the ongoing violence … mitigating violence and limiting the bloodshed”.
(Badael Foundation and Kvinna till Kvinna, 2015)

Women’s participation in the UN peace talks has been limited by the terms of the talks. This will continue to have an impact on women’s ability to shape their futures and the future of their country. This needs to change. Women are active at local level setting up small organisations that provide services and push for peace. Developing women’s roles in peacebuilding and their inclusion in peace talks are essential in order to achieve and sustain long-term peace in Syria. The informal inclusion of the Syrian Women’s Advisory Board to the UN delegation is not enough. Women must have a seat at the table and an equal say. Their role as equal citizens must be recognised.

The involvement of women so far has been hampered by the denial of support, resources and finances to women’s activists and women’s rights groups in Syria. Many women’s rights activists in Syria claim “peacebuilding is a process, which starts with an immediate ceasefire and inclusive negotiations to reach a political solution, and results in justice and equal rights for all citizens of Syria” (Badael Foundation and Kvinna till Kvinna, 2015). Yet, women in Syria are not included in peacebuilding and peace talks beyond informal and tokenistic platforms.

It is clear that without the extensive and non-tokenistic inclusion of Syrian women in peace talks, high-level decision-making and peacebuilding processes, peace in Syria cannot be truly achieved or sustained.