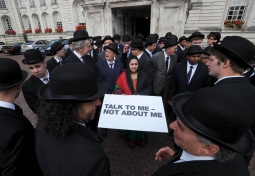 The NATO Summit in Wales starts tomorrow against a background of instability in many parts of the world. Conflicts in Iraq, Syria, Gaza, Ukraine and Libya will be on the Summit agenda as will the withdrawal of NATO troops from Afghanistan. But where are Afghan women and will the issues that affect them be included?

Despite the growing recognition that women’s involvement in peace negotiations is crucial, Afghan women will be excluded from these international negotiations on peace and security. This could undermine the strides that Afghan women have made for their rights over the past decade. In Cardiff today, the ‘No Women, No Peace.’ Campaign with our members, including Amnesty International UK highlighted the dangerous message sent by excluding Afghan women.

Samira Hamidi of the Afghan Women’s Network who has blogged for ‘No Women, No Peace.’ previously, led the Campaign action which highlighted the absence of women at the NATO Summit and the need for security provisions to include and protect women.  Samira said: ‘How can we be expected to be taken seriously at home when we are being side-lined in the very places where we should be championed? The absence of women sends a dangerous message to Afghanistan and beyond that the rights and roles of women are not important. This is a real concern for Afghan women already worried about their hard-won freedoms being traded away in peace talks with the Taliban’.

After the UK’s high-profile summit on Ending Sexual Violence in Conflict in June there was hope among civil society organisations across the world that Women, Peace and Security issues were finally getting the profile they long deserved. Importantly, there was the acknowledgement that without women, peace cannot be achieved.

It seems ironic then, just months later, that Afghan women will not be involved when Afghanistan’s security situation is discussed tomorrow. As the spotlight shines once more on the UK government’s international role, is the international community still much more comfortable talking about women’s rights in conflict than actually ensuring security and sectors provide for women, and allow women to be part of those discussions?

Hasina Safi, Executive Director of the Afghan Women’s Network, said: ‘Nobody has greater insight into the security challenges facing Afghanistan than Afghan women. Afghan women…have solutions for how to overcome these challenges. Overwhelmingly the women of Afghanistan are saying NATO should talk to me, not just about me’.

We are reminded of former Foreign Secretary William Hague’s speech at the closing plenary of the Ending Sexual Violence in Conflict Summit – he said was ‘saddened that women and women’s groups still have to ask be included at the negotiating table, as if it were a concession to be granted … when in fact it is the only route to better decisions and stronger and safer societies’.

He continued ‘We should not have to be reminded, as governments, that women must have a seat in every forum of decision-making’. Well, here we are; they need reminding.

For further information on the Campaign Action, please see the following Press Release.

Welcome to our May wrap up. On 16th May, the FCDO released the anticipated International…

GAPS is hiring a Network Assistant!