In this new report GAPS assesses the 2017 Annual Report to Parliament by the UK Government, analyses progress in the UK’s Women, Peace and Security work over the past year and makes recommendations for building on this progress including for the new UK National Action Plan (NAP). In this report, GAPS looks at the UK’s work at the UN Security Council, its efforts to support women’s participation in international events, its role in the conflict in Yemen, and other key developments from this year. 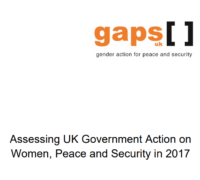 As the final shadow report for the 2014-2017 UK NAP on Women, Peace and Security, it also provides an overview of the UK Government’s reporting during the course of this NAP.

This report builds on and complements GAPS’ written submission Informing the new UK National Action Plan on Women, Peace and Security and previous shadow reports for 2015 and 2016.

The Key to Change: Supporting Civil Society and Women’s Rights Organisations in Fragile and Conflict…