On 23 April the All-Party Parliamentary Group on the United Nations held a joint meeting with the APPGs for Yemen, on Women, Peace and Security, and on Global Security and Non-Proliferation, entitled: “The Global Humanitarian Landscape: How the UN is addressing crises in Yemen and across the world.”

The UN Under Secretary-General for Humanitarian Affairs and Emergency Relief, Sir Mark Lowcock, addressed attendees alongside Colette Fearon, Deputy Humanitarian Director at Oxfam, on the current state of humanitarian relief operations around the globe before focusing in more detail on Yemen. 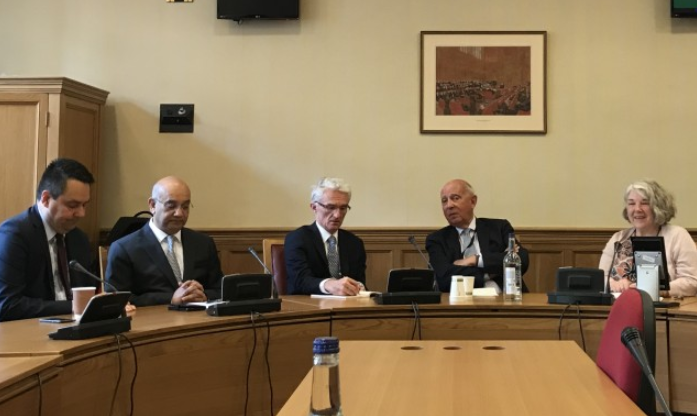 At present, Yemen is facing the world’s worst humanitarian crisis – which according to Sir Mark is a direct consequence of the conflict between the Saudi-led coalition and Houthi rebels and one which continues to put immense strain on the UN system.

Sir Mark outlined the scale of the fallout, explaining that in 2019 the UN has had to increase its food support in order to feed 10 million Yemenis per month.  Speaking more broadly about the relief effort in Yemen, Sir Mark stated that the UN’s humanitarian response had “unquestioningly saved millions of lives.”

He noted that while last year was their most successful for fundraising, only 10% of the $4 Billion pledged by member states in Geneva recently had been paid. He warned that should the pledges not be fulfilled in the coming weeks, essential life-saving services – such as cholera treatment centres – would be under threat of closure.

Ms Fearon began by stating: “the people of Yemen are dying a slow death.”  She added that the “total collapse of social infrastructure” has exacerbated suffering on multiple fronts including in the areas of gender-based violence, child soldiers and preventable diseases.

Continuing on, Ms Fearon pinpointed the issue of ongoing British arms exports to the region, stating “We want the UK government to immediately suspend all arms sales to the Saudi and UAE-backed coalition because there is a clear risk they will be used to commit serious violations of international humanitarian law.”

This echoed the conclusions of the recent International Relations Committee report that concluded British arms sold to Saudi Arabia “narrowly on the wrong side [of international humanitarian law]: given the volume and type of arms being exported to the Saudi-led  coalition, we believe they are highly likely to be the cause of significant civilian casualties in Yemen, risking the contravention of international humanitarian law.”

UNA-UK has been calling on the UK to uphold its international obligations and suspend arms sales to all parties to the conflict. See more about their campaign Yemen Can’t Wait.

During the meeting, both Sir Mark and Ms Fearon stressed that a nationwide ceasefire was imperative in order for progress to be made in alleviating the suffering of Yemeni civilians.

Chaired by Lord Hannay, participants at the meeting included MPs Keith Vaz, Chair of the APPG on Yemen, Stephen Twigg, Chair of the International Development Committee and Douglas Chapman, SNP spokesperson for defence procurement, as well as a host of NGOs and academics working on humanitarian issues.

CELEBRATING NINE WOMEN CAMPAIGNERS FOR PEACE - NO. 3 AND NO. 4 To celebrate International…

On Monday 16 November 2020, the All-Party Parliamentary Group on Women, Peace and Security (APPG-WPS),…