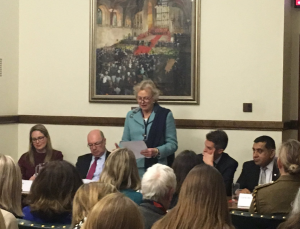 Baroness Fiona Hodgson of Abinger CBE, Co-Chair of the APPG-WPS, opened the event. Baroness Hodsgon reflected on the significance of 2018 as the first year of the implementation of the UK NAP 2018-2022, an opportunity for the UK government to demonstrate its commitment to the Women, Peace and Security agenda.

Lord Ahmad of Wimbledon, FCO Minister of State for the Commonwealth and the United Nations and the Prime Minister’s Special Representative on Preventing Sexual Violence in Conflict, spoke on the importance of cross-government working to the successful implementation of the Women, Peace and Security agenda. Lord Ahmad also noted the shrinking civil society space, particularly for women and girls, and emphasised the UK government’s commitment to delivering for women and girls affected by conflict. The new network of Women Mediators across the Commonwealth, hosted by GAPS member Conciliation Resources and funded by the UK government, is one such initiative. 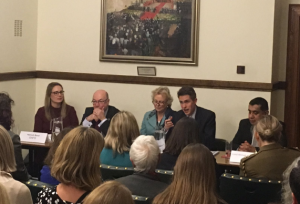 Secretary of State for the MOD, the Rt Hon Gavin Williamson MP, outlined how human security is at the centre of the MOD’s work, for example through the newly launched Joint Services Publication 1325: Human security in military operations and the inaugural Military Gender and Protection Advisers course held at the Defence Academy in 2018. The Secretary of State finished his report with a commitment to embrace Women, Peace and Security as fundamental to the MOD’s work and to the ability to make a difference on the ground.

The Rt Hon Alistair Burt MP, Minister of State for DFID, noted that the promotion of the Women, Peace and Security agenda is a global priority for the UK government. Minister Burt highlighted the UK government’s commitment to gender equality and the fulfilment of women and girls’ rights, including through: political participation; economic empowerment; and ending and responding to violence against women and girls.

Hannah Bond, GAPS Director, presented the GAPS network’s Shadow Report for 2018. Hannah welcomed the positive steps taken by the UK government in the development and implementation of 2018-2022 UK NAP. Hannah called for the UK government to prioritise the rights, needs and experiences of women and girls affected by conflict through meaningful consultations and engagement with women and women’s rights organisations, including with women displaced by conflict. Hannah noted the importance of accessible, long-term, core and flexible funding for women’s rights organisations in order to support their vital work in service delivery and conflict prevention. Other key recommendations from the Shadow Report include the need to: track Women, Peace and Security spending; meet international arms control commitments; address the root causes and drivers of gender inequality, violence and conflict; and establish a monitoring and evaluation framework for the UK NAP that includes reporting on impact indicators.

Baroness Hodgson closed the event, welcoming the GAPS Shadow Report and thanking the three UK government departments for their presentations. 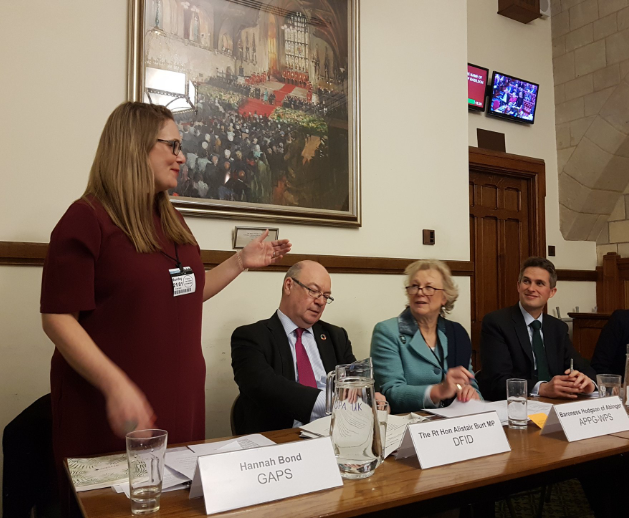 Special thanks to Rosy Cave, Head of the Gender Equality Unit and of the Office of the Prime Minister’s Special Representative on Preventing Sexual Violence in Conflict at the FCO, for representing Lord Ahmad of Wimbledon on the panel during a brief absence to attend to Parliamentary business.

APPG on Women, Peace and Security: Joint meeting with the APPG on Afghanistan and Minister for Afghan Resettlement

Updates Women, Peace and Security and Humanitarian Action (WPSHA) Compact GAPS has been a vocal…