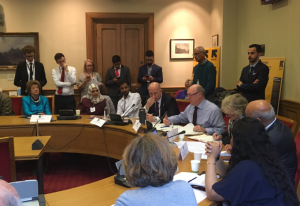 The meeting heard from: the Rt Hon Alistair Burt MP, Minister for International Development and Minister for the Middle East at the Foreign and Commonwealth Office; Ciarán Donnelly, Senior Vice President for International Programmes at the International Rescue Committee; Marwa Baabbad, Yemen Project Manager for the Strategic Peacebuilding Programme at the Oxford Research Group; and Dalia Qasim, Founder of the Hodeidah Girls Foundation. 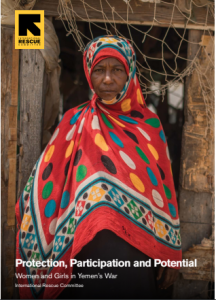 Minister Burt outlined the ways in which the UK government is supporting women’s participation in the Yemen peace process, for example through the inclusion of a Gender Advisor role in the UN Special Envoy’s office and through funding to UNHRC, the International Organisation for Migration and UNICEF. Ciarán Donnelly highlighted the disproportionate impact of the war in Yemen on women and girls and called for the humanitarian community to mainstream gender-sensitivity as well as targeted funding to address gender-based violence. The International Rescue Committee has published a report – Protection, Participation and Potential: Women and Girls in Yemen’s War – on the importance of a gender-transformative agenda for Yemen, including recommendations for all humanitarian actors to prioritise the needs of women and girls in Yemen’s conflict and the meaningful participation of women and women-led organisations in peace talks. 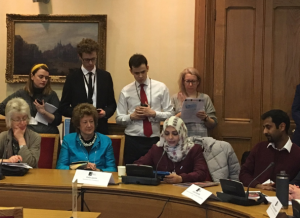 Dalia Qasim shared a first-hand testimony on the gendered impact of the conflict on civilians and reminded attendees of the leading role that Yemeni women play in the delivery of humanitarian services and in conflict resolution. Marwa Baabbad spoke on the frustrating lack of representation of Yemeni women peacebuilders in the media and in formal processes, despite all the work that they do on the ground, and on the importance of long-term, flexible funding to grassroots civil society organisations in Yemen.

GAPS is hiring a Policy, Advocacy, and Communications Officer

As we mark the 26th UN Climate Change Conference of Parties (COP26) in Glasgow, GAPS,…