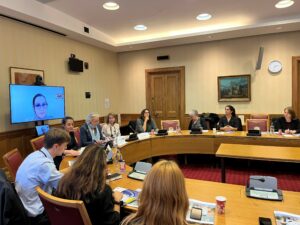 On Monday 10th October, the All-Party Parliamentary Group on Women, Peace and Security (APPG-WPS) hosted an event in collaboration with Gender Action for Peace and Security and the University of Sheffield to launch a report titled Listening to Women’s Rights Organisations: The UK’s Gender and Women Peace and Security Practice in Iraq. The event was chaired by Baroness Hodgson, co-chair of the APPG-WPS, and it gave space to discuss some of the key findings from the report, in particular the challenges facing women’s rights activists and organisations in Iraq around implementation of the WPS agenda and funding for this.

The event heard from:

The speakers began by introducing the report, including discussing why the report was written and how it came about. The speakers outlined that following conversations with women in Iraq, concerns had been raised that women’s rights organisations and civil society organisations on the ground were facing difficulties making their voices heard at the international level. The speakers discussed that there was a need (and is still a need) for evidence-based research specifically highlighting what women on the ground in Iraq need from international donors and governments to help advance women’s rights and gender equality, and therefore the report came about. The speakers spoke in detail about the interviews that were conducted for the report and outlined how women in Iraq were calling for more representation in academia and other spaces to amplify their voices.

The event was also an opportunity to hear directly from civil society representatives in Iraq, who discussed how without a change to the political situation, and more movement towards equal rights in both law and policy, it will be difficult to move towards a country with equal rights for women and girls.  From a civil society perspective, the speakers discussed the need for support and solidarity with women’s rights activists on the ground by moving past consultations to real tangible action. While the speakers were pleased that the UK continues to provide funding to Iraq, they also questioned why the situation for women on the ground is still deteriorating. They outlined the challenges facing donor funding, particularly when being funnelled through larger multi-lateral organisations, rather than directly through grassroots WROs, and recommended that this be looked at for future funding.

A Q&A session followed the speakers’ presentations, where they took questions from the audience about various topics, including how the British Embassy in Iraq can play a role in supporting women, and whether there should be one encompassing NAP for the whole Arab region. The Q&A session was also an opportunity for the speakers to discuss how the UK Government can develop funding that is more intentional about supporting women activists in Iraq.

Read Listening to Women’s Rights Organisations: The UK’s Gender and Women Peace and Security Practice in Iraq in full.

On Tuesday 4 February 2020, the All-Party Parliamentary Group on Women, Peace and Security (APPG-WPS),…

On Tuesday 20 October 2020, the All-Party Parliamentary Group on Women, Peace and Security (APPG-WPS),…