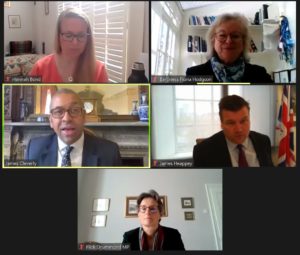 Baroness Fiona Hodgson of Abinger CBE, Co-Chair of the APPG-WPS then took the Chair of the meeting. She continued by reflecting on the events of 2020 including Brexit, the pandemic, the merging of the FCO with DIFID and talked about the critical need to implement the Women, Peace and Security agenda in full. Baroness Hodgson spoke about the gendered impact that COVID-19 has had on women and girls globally and how this has exacerbated existing gender inequalities. She then introduced the three speakers:

First, we heard from James Cleverly MP, Minister for Middle East and North Africa at the FCDO. Minister Cleverly began by giving reassurance that Women Peace and Security will remain a priority for the FCDO. He reflected on the challenges of the past year and how financial pressure has affected funding to gender equality work, but emphasised that the FCDO has remained committed to the issue as shown by the funding of GAPS’ Now and the Future – Pandemics and Crisis: Gender Equality, Peace and Security in a COVID-19 World and Beyond, the Conflict, Stability and Security Fund’s (CSSF) new portfolio on Gender, Peace and Security, and the funding of International Civil Society Action Network’s protection framework for women peacebuilders.

James Heappey MP, Minister for the Armed Forces at the MOD spoke next. Minister Heappey shared the MOD’s recent work on Women, Peace and Security which is included in pre deployment training carried out for British troops going to join the UN Peacekeeping Mission in Mali. He also spoke about the Defence Academy’s Human Security Advisory course which has continued despite the recent pandemic. Minister Heappey also noted that human security is now central to the way the MOD design their mission.

Lastly, we heard from Hannah Bond, Director of GAPS. Hannah discussed the areas where the Government has made progress, and highlighted where more can be done, such as in funding for, and the domestic application of the UK NAP on Women, Peace and Security. Hannah reflected on the 2020 merger of UK foreign affairs and development assistance, the Integrated Review, and announcement of ODA cuts, and looked to ways that the UK Government can consult with civil society to ensure that Women, Peace and Security is integrated into the UK Government’s work. Hannah also presented the GAPS Shadow Report which assesses the UK Government’s 2020 Annual Report to Parliament on the NAP and focuses on how the UK Government has used, and could have used, the third year of implementation for this NAP to lay a strong foundation for the remaining years of the NAP.

GAPS and the APPG-WPS look forward to continuing to monitor and assess the UK Government’s NAP on Women, Peace and Security.

In this shadow report, GAPS assesses the 2021 Annual Report to Parliament by the UK…

Happy New Year to all our subscribers, and welcome to our January wrap-up! We are…