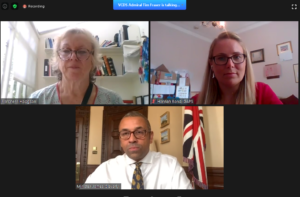 Baroness Fiona Hodgson of Abinger CBE, Co-Chair of the APPG-WPS, opened the event. She noted the significance of this year as it is the 20th anniversary of UN Security Council Resolution 1325, the landmark resolution on Women, Peace and Security. James Cleverly MP, Minister of the FCO and DFID began by giving updates on his departments’ work on Women, Peace and Security, such as the announcement that the UK will be leading UN Women’s Action Coalition on Gender-Based Violence, turning commitments of the Preventing Sexual Violence Initiative (PSVI) into reality, publishing the findings of DFID’s What Works to Prevent Violence Against Women and Girls, and the continued use of the GAPS The 10 Steps: Turning Women, Peace and Security Commitments to Implementation report.

Minister Cleverly added that his department are funding practical measures for women’s participation in peace processes and increasing support for women peacebuilders. Admiral Tim Fraser CB, Vice Chief of the Defence Staff at the MOD also shared progress such as the use of the Joint Services Publication 1325: Human security in military operations and revisiting for a second version, continuing the Human Security training on top of existing tailored militarily training, and examples of the MOD’s recent gender equality work, such as funding courses for overseas students which includes fully funding women’s participation on tier 1 courses.

APPG on Women, Peace and Security: WPS in the Philippines – Examining the Comprehensive Peace Agreement for the Bangsamoro

APPG on Women, Peace and Security: Women’s Participation in Peacebuilding in Yemen