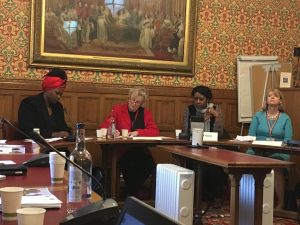 On Tuesday 4 February 2020, the All-Party Parliamentary Group on Women, Peace and Security (APPG-WPS), together with the All-Party Parliamentary Group on Sudan and South Sudan, Oxfam and GAPS hosted an event titled “Feminist Leadership and Inclusive Peacebuilding”. This event built on Oxfam’s campaign to achieve gender justice through leadership and followed an event on the evening of Monday 3 February 2020 which raised awareness of the work that feminist leaders are doing in challenging places around the world. Oxfam has recently launched two reports on women’s leadership for peace in South Sudan: 1) Our Search for Peace, which highlights the vital roles women have played in peacemaking; and 2) Born to Lead, which analyses the modalities of women’s participation and influence in South Sudan’s peace processes. The Parliamentary event brought a policy focus to the importance of promoting and supporting feminist leadership in fragile and conflict-affected states (FCAS).

Baroness Hodgson of Abinger CBE, Co-Chair of the APPG-WPS, opened the event by reflecting on United Nations Security Council Resolution (UNSCR) 1325, and the importance of continuing to progress the Women, Peace and Security agenda with the newest resolution, UNSCR 2493, which encourages UN Member States to create safe and enabling environments for women’s leadership, particularly around human rights and peacebuilding. Baroness Hodgson introduced the speakers Riya William Yuyuda and Hala al Karib. Riya is an experienced peacebuilder in schools and communities and has been part of the South Sudan High Level Revitalisation Forum peace process, and Hala is the Regional Director of the Strategic Initiative for Women in the Horn of Africa, a network of civil society organisations established in 1995 by a coalition of women’s rights activists with the aim of strengthening learning within civil society organisations that address and challenge women’s subordination and violence against women and girls in the Horn of Africa.

Riya spoke about her experience of the peace processes in South Sudan and why it is so critical for women and girls to be a part of the decision-making. Some of Riya’s policy recommendations for the international community and the UK Government include: an increase in financial and technical support to women’s rights organisations; undertaking robust monitoring and evaluation of interventions and implementing learning based on the evaluation; strengthening work on age-sensitive issues such as child marriage within the Women, Peace and Security framework; and further support to initiatives that enable women and girls from FCAS to share their stories. Similarly, Hala spoke about the importance of inclusivity in the peace process, as women and girls made up 60% of the protestors in the revolution in Sudan but have been systematically excluded from the political processes. Hala explained how the exclusion of women and those most affected by conflict makes it more difficult to achieve peace. She noted that the struggle for peace in Sudan is an issue which results from investment into military power rather than investing in institutions which analyse and respond to the root causes of the conflict. Hala’s clear policy recommendation is that sustainable and inclusive peace is only possible if governments and the international community invest in infrastructure for peace. This means investment in civil society, in transitional justice processes, and in services that respond to the gendered impacts of conflict, such as increases in violence against women and girls.

The discussion was then opened up to the audience who asked the speakers questions on how the UK government can better support peace processes and conflict resolution in Sudan and South Sudan. The speakers’ answers included investment in civil society organisations, specifically women’s rights organisations in Sudan and South Sudan. Riya and Hala also suggested that the international community looks into the factors that drive conflict when considering its approach. In particular, the UK government should aim to understand the impact of militarisation on women and girls. For example, if military training for the Sudanese and South Sudanese military is proposed, sexual and gender-based violence faced by women and girls by military men has to be considered. Additionally, Riya recommended that the UK must revise what kind of support they want to give to women and girls. She suggested that the UK government can support women and girls by putting pressure on the South Sudanese government to implement women’s quotas and by providing assistance in achieving justice for women and girls. Both Hala and Riya highlighted that international instruments such as UNSCR 1325 and the Convention for the Elimination of Discrimination Against Women (CEDAW) are essential for government accountability, and that they should be localised to ensure that initiatives are owned and led by local populations to ensure their meaningful implementation.

Why I’m optimistic about the future for women in Afghanistan